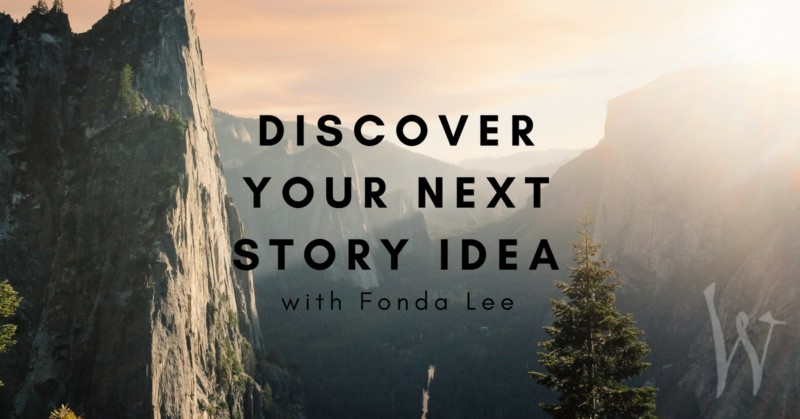 The first week of December, we met with Fonda Lee to discuss how to discover great story ideas. Besides being an engaging, friendly speaker, Fonda has a success story most of us drool over. She began her publishing journey at our very own Willamette Writers’ Conference in 2013. Over the past 4 years, she’s published 3 books and is under contract for 3 more. Clearly, this is a writer with no problems finding ideas for her stories.

Fonda started off sharing the things she’d wish she’d known before she was published. Here are her truths:

So if we combine these four truths together. We get Fonda’s advice for building all of this into one framework: connect, combine, steal, remix, mash-up, and transform. Here, we see how both the optimistic artist and the cynical commercialist can find common ground.

One of the best things I love about attending our WW meetings is that we (usually) get some hands-on ideas for how to implement the concepts discussed in the talk. Fonda’s idea really hit home for me and an idea – that is, a feasible, doable idea – came out of the scant 10 minutes we spent on this exercise. The exercise: Take a sheet of paper and make three columns. At the top of the first, write: Things I’ve experienced. At the top of the middle, write: Things I Know About. At the top of the third, write: Things I’m passionate about. To give you an example from my list, I wrote about some of the things I’ve experienced due to our family’s infertility. In the second, I wrote about all the different historical eras I like to study – Ancient Rome, Medieval Europe, Tudor England, Regency England, etc. And in the final one, I listed my passions, one of which is knitting.

Then, explore your lists and see what your connections are. Pull something from each category and see how it mashes up. What did I come up with? “An infertile woman discovers the ability to knit portals through time.” I’m not sure what else would happen in this story, but I imagine that she might fall back through time, be mistaken for a midwife (or a witch), and use her knowledge to both help the women she encounters and find healing for herself. Again, it’s just a seed, but it’s not half bad, if I do say so myself.

Give it a try. I think you’ll surprise yourself.

Fonda then gave us some Practical Advice:

Q: Did you have a large social media platform that influenced publishers?

A: No, and it’s not necessary. There’s an expectation you have to have some presence. But it has little bearing on getting published. For the average author, it does not have a bearing.

Q: To what extend do tricks of the trade (a la Writers’ Digest, etc) work?

A: There is a difference between a writing workout/conditioning and actual writing. It is separate from the work itself. Don’t rely on tricks of the trade to get to a finished book.

Q: How do you develop characters?

A: Sometimes, it’s character first (Zeroboxer), plot first (Exo), or world first (Jade City). What is the spark of that idea? Then gather material around it. Ask yourself: “who would be really poorly equipped to deal with this problem?” Or “What would be the worst thing that could happen to this character?”

Q: How much world building has to be done? Every detail?

A: Identify the core of the story and the character. Which components of the world need to be developed? In Zeroboxer, it was a story about an athlete at its core. World building has to center on his experience – all the other stuff didn’t have to be as detailed. If your world feels credible, readers will extrapolate.

Q: What do you do when you’re finished with one book and haven’t started another? Do you have a writing routine?

A: I don’t believe in writing every day, but I do something creative every day. I have a parallel process. At any one time, I’m drafting the new book, revising the previous one, and ruminating on the next one. I also spend about 2-4 months of research before starting a new book for things that will go into the world.